Episode 8: Wherein Organigirl Goes to War With Snails and Slugs and Encourages You to Do the Same

The gnomes are at it again. I was sure they had gone on an extended vacation, moved to Milwaukee, or given up entirely, but I was wrong. Today, I went out to the garden to divide an artichoke plant, and here's what I found under the plastic mulch: 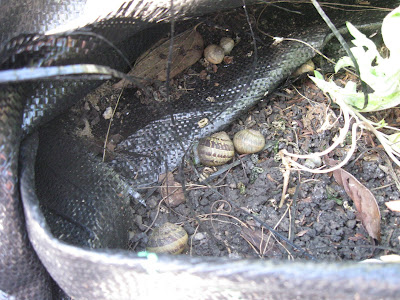 That's right - snails. The gnomes love to collect scads of a particular garden pest and then deposit them strategically in my garden to inflict the most damage. I'm a little surprised they chose this spot under the artichokes, since artichokes aren't as tender as, say, my newly planted flowers. 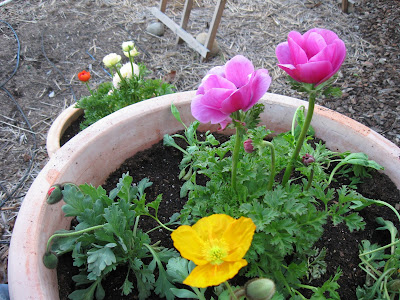 I suppose some mysteries are destined to remain unsolved. This snail infestation problem, however, was not.
I know that some of you are probably thinking, "I hope she didn't mercilessly destroy those adorable little land dwelling mollusks!" You aren't going to like my answer, but kudos for you for knowing that snails are mollusks. 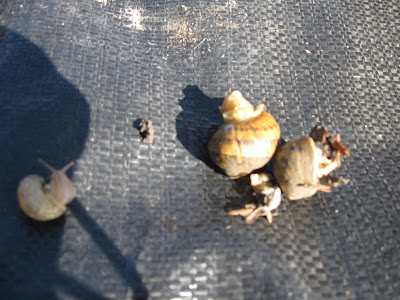 Pure evil, right? And they weren't alone. I also found several slugs, which also make my hit list. Here are some snail or slug eggs I found a few weeks ago elsewhere in my garden: 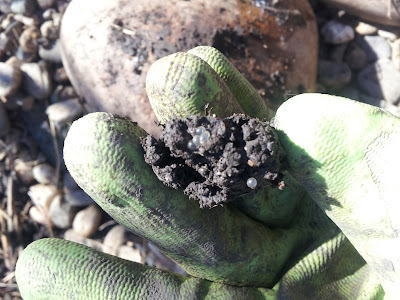 Truly, the best way to deal with snails, slugs, and their eggs without using pesticides is to hunt them down and smash them (quickly - be kind). They like to hang out in cool places underneath rocks, debris, and, apparently, plastic mulch. Going out at night or in the early morning with a flashlight is a great way to find them because they like to come out when it's dark outside. Picking them off a few at a time really does make a difference, so stick with it and you'll eventually notice fewer holes in your plants and fewer of those slimy trails winding around the flat spaces in your garden. You might even get lucky once in a while and find a whole community of snails and slugs conveniently living together in one place - or conveniently dropped under a single plant by an ill-willed gnome. We mustn't let the gnomes win...